Many businesses around the world have been hit hard by the global pandemic, but one British Columbia company has been busier than ever supplying vital equipment for the fight against COVID-19.

Weatherhaven has gained a worldwide following for their rapidly deployable shelters which are used for a variety of purposes ranging from military operations to mining camps to mobile medical clinics. But when COVID-19 became a full blown global emergency earlier this year, the Coquitlam-based company focused their attention on supplying quick-build medical shelters to help in the treatment of patients around the world. They’ve been working at top speed ever since.

“We developed a solution for COVID that was an isolation ward, and we’ve just been blown off our feet,” said Weatherhaven CEO Ray Castelli, a West Vancouver resident. “We’re so busy supplying all around the world, helping nations with their COVID response efforts, we’re having our busiest year ever as a result.”

The company, founded by Jim Allen in 1981, initially specialized in tents and equipment for rugged outdoor enthusiasts and climbers. They’ve moved on to bigger things since then, expanding into providing equipment for clients such as forestry and mining companies, military and peacekeeping operations, and portable hospitals, working in nearly 100 countries around the world, on all seven continents.

It was the medical supply side of the business that went into high gear when COVID-19 became a full-blown crisis.

“One of the early sources of spread was actually the hospitals themselves,” said Castelli, who has been Weatherhaven’s CEO since 2008. “People who had the disease would be showing up at the hospital, and therefore people who didn't have the disease who were in the hospital could catch it.”

Weatherhaven’s research and development teams looked at some of the main problems of COVID-19 – transmission through water droplets hovering in the air, and the threat of treatment areas being overwhelmed or compromised – and came up with a solution.

“We did some quick analysis and design and came up with this concept of a negative pressure isolation word,” Castelli said. “It’s basically an isolation ward whereby we would use a tent but we also would use kind of an airlock system combined with over-pressurization and that would force the air out. … You basically suck air out of the closed system and then recirculate that air through a HEPA filter that would weed out the pathogens and then reintroduce that air, and basically do these air exchanges 20 or 30 times an hour. What that does is it keeps the patients and the people working on the patients safer.”

The resulting product is a rapidly deployable tent hospital that can be set up anywhere in the world and be safely used to treat 100 or more COVID-infected patients. Since the pandemic began, Weatherhaven has supplied equipment to locations in more than 15 countries around the world ranging Chile to United Arab Emirates to Guinea to El Salvador. 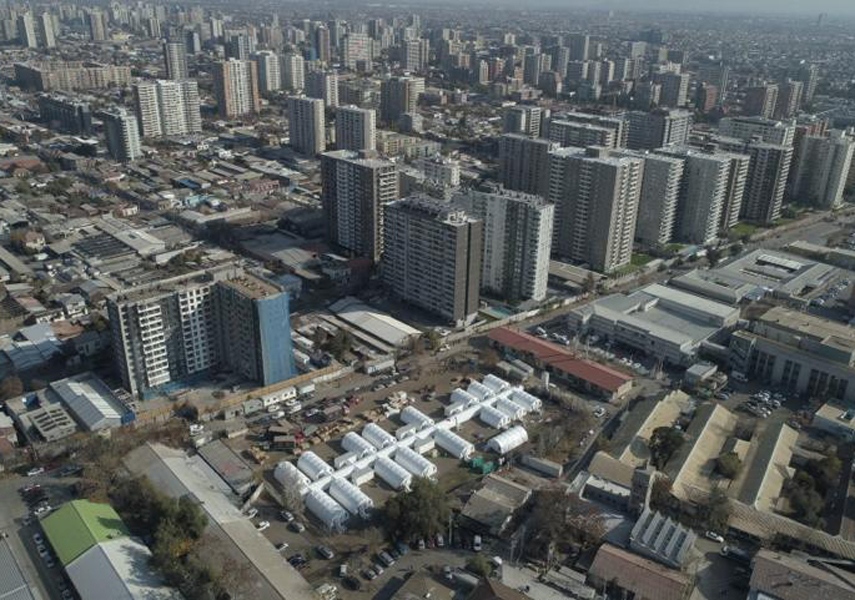 A COVID unit built by B.C.'s Weatherhaven is seen in downtown Santiago, Chile. The company can build units for 100 beds or more in less than a week. Photo: Weatherhaven

The tents can act as a separate isolation ward beside a hospital or other large institution where an outbreak is happening, like a prison, or they can be the main hospital in a location that lacks medical infrastructure.

Speed is one of the most important aspects of the idea of a rapidly deployable shelter. A small clinic could be put up in a day, while larger hospitals could be done in a week or less, said Castelli, depending on the labour force available.

Castelli said the Canadian government has ordered some units that will be ready to deploy wherever needed if there are any big second wave outbreaks. And the units are ready for whatever weather this country can throw at it.

The events of the past six months have put Weatherhaven in the unique position of a booming business at a time when many other companies are struggling. COVID-19 posed some problems for them as they upped their production, but they also take great pride in providing supplies that are helping people around the world in these challenging times, said Castelli.

“We all had to go through the trepidations of having to continue working and making sure that our locations were safeguarded so that our people, our employees, stayed safe,” said Castelli. “In a case like this with COVID, it’s kind of doubly nice that not only are we busy and able to keep people employed and even hire more people, but at the same time we’re helping countries respond. … Our employees are enormously proud of the work they're doing.”

This article by Andy Prest originally appeared in TriCity News on July 30, 2020.